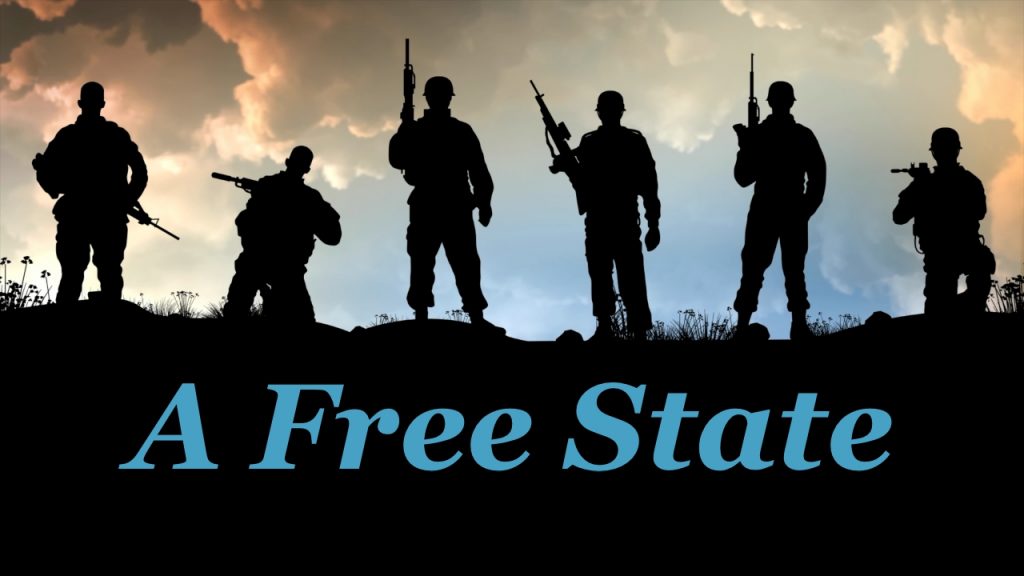 The recent spate of sensational mass murder events has led to the usual call for legislative infringement upon gun rights from the typical cheerleaders of tyranny.  After several engagements  on social media I offer the following excerpts to help think straight on the issue and, hopefully, change the narrative.  Remember, Constitutional gun rights secure a free state.

The Security of a Free State

The Second Amendment was written so that We The People would not rely on politicians & bureaucrats to execute law.  Gun rights along with the militia clauses within the US Constitution need to be viewed as part of a holistic federated system of local self-government.

Gun rights are not merely about self-defense but, as plainly stated in the Second Amendment, for the security of a free state.  Even supposed gun rights advocates play into the hands of aspiring tyrants when ignoring the militia clauses as well as the clear purpose for denying the general government any authority to infringe upon the right to keep and bear arms.

The Cycle of Self Governance

“The Government” is We The People, not politicians & bureaucrats.  We The People were intended to execute the law as the final check point in the cycle of self governance.

This is why popular militia are necessary to the security of a free state: they are the ultimate mechanism of self-government. 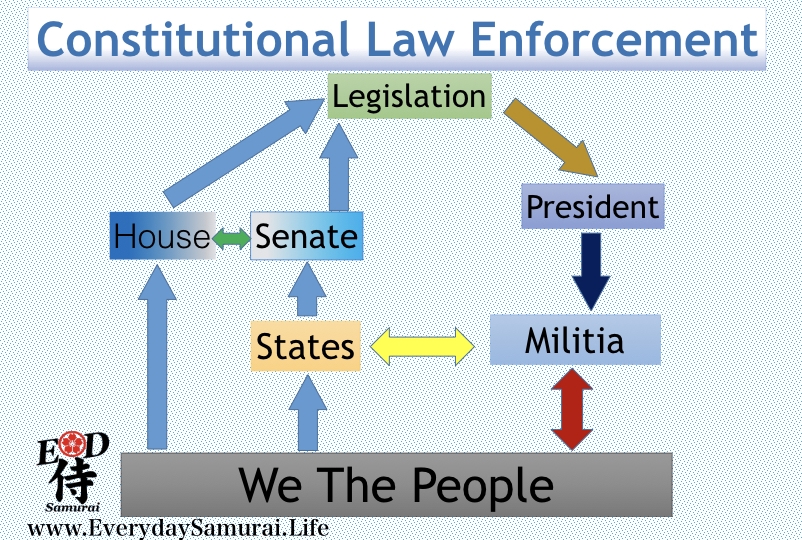 We The People as Militia of the several States execute the laws of the union.

Congress, under (Art.1, Sec. 8, Cl. 16) has authority to arm, organize & discipline the militia for service to the union when a portion of them are so called through the authorities in Article 1, Section 8, Clause 15.

Executing the law is constitutionally tasked to the militia.  No other governmental institution or Constitutional component is deemed “necessary" in the union’s operating charter, not the President, not the Supreme Court, not even Congress.

Armies are raised, a Navy is maintained and militias are called forth by Congress.  Called forth from where?  From the respective member states, of course, because militia are, within the federal system, state level institutions.

Armies and a Navy have no specified constitutional tasks.  Militia do.  This is a tremendous distinction.

Yet the militia are absent from today's governmental configuration.  No wonder there's so much dysfunction, crime, and insecurity.  No wonder rogue officials are so able to erode We The People's gun rights.

The security vacuum witnessed today is on account of Congress’, along with the respective member states’, dereliction of duty to arm, organize, and discipline the militia to fulfill their functions of executing the law, repelling invasions, and surpassing insurrections.

In other words, there is a fundamental misunderstanding of why the Constitution specifically protects gun rights.  People have forgotten the real reason for the Second Amendment.

Consequently, the law has been perverted from protecting people and their property into an instrument of plunder.  Rather than being secure in our persons, homes, and effects we are subjected to domestic and foreign invasions.  Further, while rights are trampled and free expression suppressed, there are office holders, on the supposed left and right, seeking to transform the fundamental character of what was supposed to be a union of free and independent states into a totalitarian socialist nation.

Decentralization is the solution.  All the necessary legal authorities to enforce federalism are already present.  The Second Amendment is the proper vehicle for ensuring the Tenth.

Who executes the law is more important than who writes it.  There's no need to change the Constitution if rogue politicians and bureaucrats ignore it anyway.  Voting harder will not change anything.

"Who executes the law is more important than who writes it.

That is why the rightful remedy is nullification.  Legislation passed in contravention to delegated Constitutional authorities is void.  With the Second Amendment properly understood, militia-based law enforcement is the mechanism for preserving local powers under the Tenth Amendment.  If the local militia gets handed unlawful legislation they have the option of ignoring it.

Don’t confuse the National Guard with the militia of the several states.  There is nothing “national” about the militia.  These governmental institutions preceded the Constitution by over more than a century and were incorporated into the federal framework without definition or modification.

The National Guard is a state level adjunct to the Army found in Article I, Section 10.  Congress does not have any delegated authority to define who or what the militia are.  They can only arm, organize, and discipline the militia to be ready to serve the union by executing law, repelling invasions, and suppressing insurrections.

This makes the 1903 Dick Act prima facie unconstitutional.  There is no such thing as a militia of the United States and an unorganized militia is a contradiction of terms.  What we need to know about the militia is clearly spelled out in the Constitution: a militia is a state level institution (Art. 2, Sec. 2) that is armed, organized, and disciplined (Art. 1, Sec. 8, Cl. 16) for service to the union by executing law, repelling invasions, and suppressing insurrections (Art. 1, Sec. 8, Cl. 15).

Of course conniving politicians will try to bend the Constitution to suit their self-serving ambitions.  Politicians and bureaucrats do not like it when militia refuse to collect unlawful taxes on whiskey, invade Canada, invade Mexico, invade Cuba, or invade the Philippines.  Consequently, the decentralized militia system had to be undermined to create the omnipotent centralized, nationalist state operating today.

However, legislation repugnant to the Constitution is void and should rightly be abrogated, rejected, and nullified.  It will require robust popular militia units to restore federalism and if Congress is derelict of this duty it falls back on the member states and local polities to do so.

This is not an “anti-government” movement.  On the contrary, it is restoring the federal principles originally conceived as the system of government enacted by the Constitution.

“The Government” is We The People, not politicians and bureaucrats. This is why militia are necessary to the security of a free state: self-government.

The Constitution needs to be understood comprehensively with all the branches, constituencies, and components performing specific, limited roles.  Allowing the general government, including its Supreme Court, to determine its own authority is a key contributor to the confusion.  Judicial review is not a delegated authority.  Alexander Hamilton, in Federalist 78, said this would make the servant the master...yet here we are.

The rightful remedy, as it was while selling the contract, is nullification.  This was reaffirmed by the principles of ’98, found in the Kentucky and Virginia Resolutions.  All legislation enacted in contravention to the constitution is void.  We The People are the final authority, not tax-funded robed bureaucrats.

Congress and the Supreme Court have jurisdiction over only the limited & enumerated authorities delegated to them by the people...and no more.  They have no authority to disarm, restrict, or license the pre-existing right of the people to keep and bear arms.  In fact, they were specifically prohibited from infringing on these rights via the Second Amendment.

All modern day federal gun control legislation is unconstitutional and any public office holder that exceeds the delegated authority of their office ceases to operate under color of law, thereby losing all legitimacy or so called qualified immunity.

Anyone calling to violate Second Amendment gun rights is perverting law and all such infringing politicians and bureaucrats are operating outside the legitimacy of their office.  In exceeding their authority they become outlaws yet there is, presently, no enforcement mechanism available to stop them.

Here again we see that the problem is not one of what the law is but who executes it.  Because the federal system has been so thoroughly perverted, rogue officials are able to subvert law in favor of legislation, and regulations, backed up by armed bureaucrats enforcing their will.  What was intended to be a free state has become a police state.  Instead of being a union of laws, we are living under Leviathan.

The Constitution only granted the general government jurisdiction over three crimes: piracy, counterfeiting and treason.  All enforcement activity carried out by federal agencies today evince the arrogance of rogue officials lusting after the centralization of power.  Ultimately this power comes down to control over resources and it comes at the expense of the tax-paying citizen.

Perhaps one could justify a federal agency to investigate counterfeiting, treason, and acts of piracy in tandem with the navy.  However, this does not legitimate the bloated bureaucracies imposing federal legislation today.

There is no Constitutional basis for the FBI, ATF, DEA, DHS, Coast Guard, etc and there is no need for tax payers to fund them.  The preponderance of legislation federal agencies enforce is outside any delegated authority and only leads, directly, to infringements upon the free market, private property, and arms prerequisite to We The People being able to secure a free state.

Executing the law is the task of the militia.  It is We The People working as a community for our own mutual security.  Remember, it is only to secure rights that governments are instituted at all.

Law, as Frederick Bastiat so eloquently stated, is the collective mechanism of securing individual rights.  The science of justice can be expressed simply: Do all you have agreed to do and do not encroach upon other people or their property.  Rights protection agencies funded through the coercive confiscation of property cannot fulfill this role.  A tax-funded property protection agency is a performative contradiction.

"The science of justice can be expressed simply: Do all you have agreed to do and do not encroach upon other people or their property."

Agreements form the basis of contracts and encroachment upon people or their justly held property is a criminal trespass.  This is the only law worthy of enforcement and its straightforward clarity allows any moral people to understand when punitive action is just.

Using these simple, yet universally applicable principles, any law worthy of enforcement can be handled by the citizenry as militia worked out through local agreements.

There is no need for complex regulations or slick lawyers to interpret what scientific law means.  Only the facts of the case need to be carefully examined and this is a legitimate function of courts.  The court examines whether a voluntary and valid contract has been violated or if a person has suffered encroachment upon themselves or their justly held property.  There is no room for activist judges to interpret law when scientifically pursuing justice.  Just the facts.

Therefore, a free people can uphold law through militia institutions while simultaneously preventing any “alterations which will impair the energy of the system” that President George Washington warned against in his 1796 farewell address.  This is why militia, composed of the whole body of the people except for public officials, are not optional, but necessary, to the security of a free state.

The Constitution is a contract among the people and their respective states to work together as a union for self-government and the Second Amendment the mechanism for securing a free state without relying on politicians and bureaucrats.  The militia of the several states are the institutions for maintaining that contract.

The time to restore local, citizen-based, federated militia as the executors of law is now.  Start first by embracing the language of liberty.