Lockdown Land: Specious Pandemic Policy Responses and The Way Out 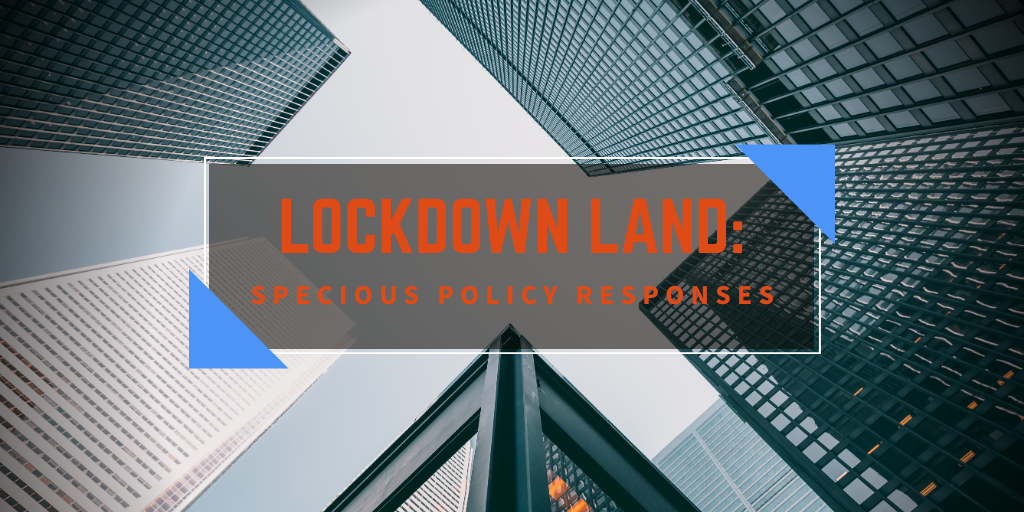 Sun Tzu rightly stated, all warfare is based on deception. While many people in modern society neglect their duty to consider the nature of war on a regular basis, it remains the ground of survival and extinction for political communities.

To secure a free state, one cannot but consider war. Those who wish for peace must prepare for war and, while healthy societies engage the division of labor and task specialization, free people can never fully outsource their security to a politico-bureaucratic caste.

This is precisely why many thinkers at the time of the founding of the United States considered standing armies, or a permanent military establishment, inimical to liberty.

Von Clausewitz added that politics is war by other means. Yet, many who have heard or commented on this dictum fail to grasp the reality of politics as a subsistence strategy. For some today, and for many throughout history, conquest, plunder, and subjugation were a means of making a living.

These are the political means, the use of coercion in human group dynamics. What is intended to instill order transforms into a mechanism for extracting resources, from the ruled to the rulers.

This is another reason why, according to Thomas Paine, government is a “necessary evil” and, in its worst form, an intolerable one. How much more so when those holding governmental authority arrogate to themselves a monopoly?

Enlightenment ideas: liberalism, private property, and equal justice under the law built modernity. The decentralized, federated republic envisioned by the constitutional operating charter offered little opportunity for political expropriation by the elites, at least in their official capacities.

Theft, force, and fraud still occur (and will probably continue given the proclivities of human nature). However, government, as the institutional organizer of justice, is to act as the defense and redress against crime, on behalf of everyone, equally and impartially, in a free society.

The organizing principle of law is justice and is most directly expressed with two directives:

2. Do not encroach upon other people or their property.

With this law can function with contracts and restitution-based criminal tort law.

In this scientific approach to ‘common law' private property is the key unit of analysis.

To enforce this simple system of law, resources must be employed and people must be compensated for their services. In this scientific approach to ‘common law', private property is the key unit of analysis.

For a crime to occur under common law, either a property boundary has been violated, or encroached, resulting in a criminal tort, or a party to a contract has failed to deliver an agreed exchange of property titles, including labor services.

In both instances, determining justice is a matter of determining what property has been violated, by whom, and then settling upon an amount of compensation to serve as restitution. Private property is the central unit of justice administration under a scientific legal approach.

Those providing security and justice services are due adequate compensation as well. Yet, when law is confined to scientific, property-based principles, administrators and service providers receive little prestige or inordinate recompense for their efforts.

In short, property-centric law offers little room for a parasitic politico-bureaucratic caste to eat out the common people's substance. This is precisely why law, when left in the hands of an exclusive elite, becomes perverted and the property principle undermined.

The politico-bureaucratic caste will continue to seek opportunities to collect “rents” from the rest of society, regardless of the form of government. This should be expected, anticipated, and actively thwarted.

Be not fooled by appearances. The politico-bureaucratic caste employ a deep web of propagandists to undermine the scientific principles or law, justice administration, and self-governance.

Again, one cannot but help considering the nature of conflict, and practice the Art of War, so as to transcend it and secure the conditions of peace. The question then becomes one of figuring out which institutional arrangements are most conducive to private property, equal justice, and enduring liberty.

Machiavelli stated that a robust militia is the foundation of all states and, where popular militia are lacking, there can be neither good law nor ought else that is good.

The United States federation depends upon militia to “execute the laws” of the union, yet these “necessary” institutions have been absent, legislatively removed, from the republican configuration since 1903. Instead, rogue officials continually exceed the limits of delegated authority to build up a permanent regulatory enforcement establishment at the expense of the public treasury.

Now the architecture of tyranny is in place and the bulk of the population is enthralled to the propaganda that lulls them into a developing technocratic serfdom.

The Elite Never Let a Crisis Go To Waste

Whether the pandemic was manufactured or just another example of elitist opportunity exploitation, the very existence of lockdown and mandate policies, amid negligible excess mortality, only evidences widespread neglect of the duty every citizen has to contribute to the security of a free state. Violations like this could not long endure with the institutions of self-government in place.

The very existence of the National Institutes of Health and its funding, from the public treasury of the United States, to the Wuhan Institute of Virology to enhance and ‘study' coronaviruses is prima facie evidence of criminal behavior.

The United States Constitution is clear on what the general government's relationship with science is to involve:

To promote the progress of science and useful arts, by securing for limited times to authors and inventors the exclusive right to their respective writings and discoveries.

Again, the very existence of these activities constitutes criminal behavior by public officials and violations of the limited, delegated authorities entrusted to them. It violates the contract they agreed to perform by way of the oath they took to the Constitution. By all rights, these rogue officials would be arrested, prosecuted, and compelled to repay the misappropriated funds, plus penalties and interest.

Yet who will do the arresting of rogue officials and the violations of constitutional order they commit? Do not expect justice to arise from the establishment institutions, including police, federal law enforcement agencies, ‘justice' departments, or from political elections. All of these avenues are fully captured and subservient to furthering the corruption of law.

They are, in design and deed, part of the problem.

Now that the balance of force capacity rests with the politico-bureaucratic caste, how do free people restore equal justice under the law and secure a free state?

The solution remains available in the principles of decentralized self-government, and in strict adherence to scientific, property-based law. Now that it is clear that existing institutions destroy the ends for which they were established, it is the right and duty of the people to alter or abolish them.

Yet this may appear like an insurmountable task given the elaborate tapestry of seemingly powerful federal and international forces arrayed against freedom.

The first step is to see these rogue officials and illegitimate agencies as operating outside the limited, delegated authority that makes up the ‘supreme law of the land'. They are, indeed, outlaws and should be considered as such.

Remember, We The People, are the government and equality under the law demands public officials ‘do all they have agreed to do' by swearing allegiance to the Constitution while not exceeding their mandates, abusing their authority, or taking license with the public trust and treasury. They are the criminals and We The People are seeking to restore Constitutional order .

There is a massive psychological hurdle to overcome, namely deprogramming the propaganda that has convinced the average citizen of special immunities and privileges for public office holders and institutions.

Seeing these oath breakers, the agencies they've created, and their policies as unauthoritative, void, and of no force is the greatest challenge. Yet this first and greatest battle occurs in the one place that each individual has complete control over, their own mind.

Every citizen yearning to be free should practice seeing in their mind's eye the power of the politico-bureaucratic caste dissolving into a mist that is then restored to the individual to assert as self-determination, organic community, and the restoration of authentic justice.

So empowered, like minded individuals can begin building new safeguards for their liberty, yet with some familiar features. Technology may evolve, and can be used for either good or mischief, yet sound principles endure.

As Machiavelli said, good militia are the foundation of all states and a necessary precondition to having good law. The United States Constitution expands upon this dictum by declaring well-regulated militia as “necessary” to the security of a free state.

Constitutional order demands that any legislation passed by the general government be “executed” locally by the militia of the several states and not by federal bureaucracies. This includes collecting taxes and ensures that all enforcement activity complies both with the contract agreed to by the constituent states and be carried into execution in a manner suitable to local communities.

Doing so would eliminate most of the federal agencies and globalist institutions unlawfully asserting control over individual lives, liberties, and properties amid the coronavirus pandemic.

In sum, ultimately, all enforcement activity must be supervised by, and subordinate to, the local population, as expressed by the institutions most likely to affect their safety and happiness. On this, the Constituion is clear. We The People must be organized, armed, and disciplined to execute the law in order to assert self-government. It is, indeed, necessary to the security of a free state.

Anything other than “well-regulated” militia opens a path to mischief and abuse by the politico-bureaucratic caste, exemplified by the technocratic lockdown land currently on display.

While everyone should do their own research and, always, stand guard at the doorway of their own mind, this documentary offers insights that must be reckoned with.

The film chronicles how a cabal of mega-corporations worked through the United Nations, using the coronavirus as a pretext to hijack the world, while aided by the mockingbird media and Big Tech.