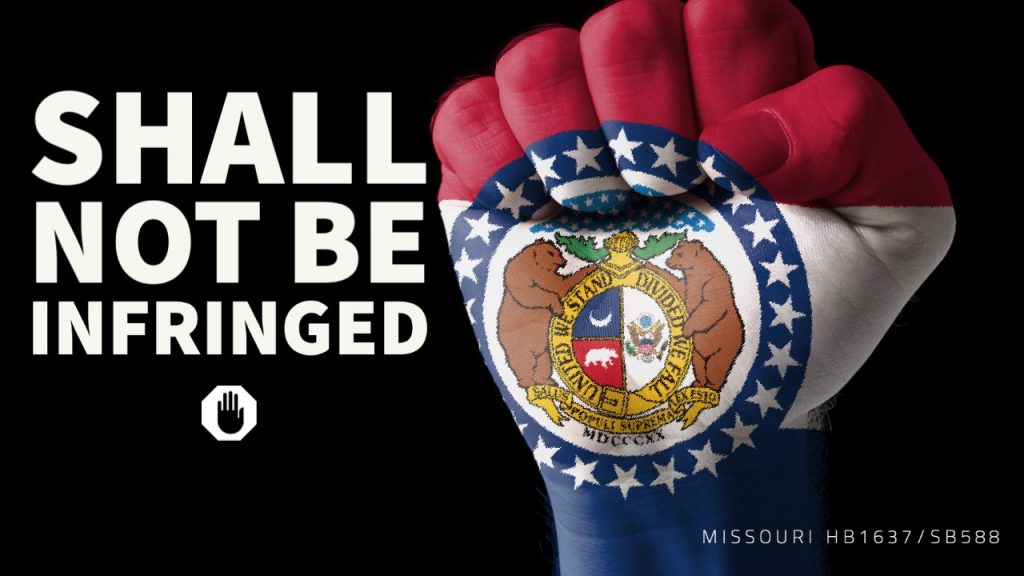 JEFFERSON CITY, Mo. (Mar. 10, 2020) – Today, a Missouri House committee passed a bill that would take on federal gun control; past, present and future. Passage into law would represent a major step toward ending federal acts that infringe on the right to keep and bear arms within the state.

Rep. Jered Taylor (R-Republic) filed House Bill 1637 (HB1637) earlier this year. Titled the “Second Amendment Preservation Act,” the legislation would ban any person, including any public officer or employee of the state and its political subdivisions, from enforcing any past, present or future federal “acts, laws, executive orders, administrative orders, court orders, rules, or regulations” that infringe on the right to keep and bear arms.

On March 10, the House General Laws Committee approved the bill, giving it a “Do Pass” recommendation for the full House. The committee rejected amendments in order to keep HB1637 true to its original purpose. Law enforcement lobbyists are pushing hard to amend out penalties that would apply to state and local law enforcement officers who try to enforce federal gun control.

DETAILS OF THE LEGISLATION

The bill includes a detailed definition of actions that qualify as “infringement,” including but not limited to:

The proposed law defines “law-abiding citizen” as “a person who is not otherwise precluded under state law from possessing a firearm.”

Under the proposed law, infringement on the right to keep and bear arms would include the National Firearms Act of 1934, the Gun Control Act of 1968. Pres. Trump’s bump-stock ban, proposed federal “red-flag laws,” and any future gun control schemes implemented by the federal government.

The legislation includes a provision that would allow anybody who violates the law and knowingly deprives somebody of their right to keep and bear arms as defined by the law to be sued for damages in civil court.

“Sovereign, official, or qualified immunity shall not be an affirmative defense in such actions.”

The bills also include provisions that would apply to federal agents who knowingly enforce or attempt to enforce any of the infringing acts identified in the law, or who give material aid and support to such enforcement efforts.

Meanwhile, the Senate companion (SB588) sponsored by Sen. Eric Burlison (R-Battlefield)  is being held up in the Senate by Sen. Doug Libla, the Chair of the Transportation, Infrastructure and Public Safety Committee. Ron Calzone, of Missouri First, said he met with Libla and specifically asked him who had concerns about SAPA and what those concerns were. “He refused to provide any of that information, whatsoever,” Calzone said.

“What became clear from that conversation, however, is that Sen. Libla is willing to pass SB588 out of his committee only if it is substantially watered down. In light of the overwhelming interest in SAPA from all across Missouri, and even all across America, let alone the incredible support in the House,  a watered-down Second Amendment Preservation Act is not acceptable! We may just have to pass SAPA in the House first and then steam roller it past Libla and through the Senate.”

The federal government relies heavily on state cooperation to implement and enforce almost all of its laws, regulations and acts – including gun control. By simply withdrawing this necessary cooperation, states and localities can nullify many federal actions in effect. As noted by the National Governors’ Association during the partial government shutdown of 2013, “states are partners with the federal government on most federal programs.”

Based on James Madison’s advice for states and individuals in Federalist #46, a “refusal to cooperate with officers of the Union” represents an extremely effective method to bring down federal gun control measures because most enforcement actions rely on help, support and leadership from state and local governments.

“Partnerships don’t work too well when half the team quits,” said Michael Boldin of the Tenth Amendment Center. “By withdrawing all resources and participation in federal gun control, states and even local governments can help bring these unconstitutional acts to their much-needed end.”

Some gun-rights supporters have argued that such a measure is “unnecessary” because it addresses a nonexistent problem with a divided Congress and an NRA-backed president. Trump’s bump stock ban obliterates this fallacy. Furthermore, the Trump administration actually ramped up enforcement of federal gun laws in 2017.

The state of Missouri can legally bar state agents from enforcing federal gun control. Refusal to cooperate with federal enforcement rests on a well-established legal principle known as the anti-commandeering doctrine.

Simply put, the federal government cannot force states to help implement or enforce any federal act or program. The anti-commandeering doctrine is based primarily on five Supreme Court cases dating back to 1842. Printz v. U.S. serves as the cornerstone.