Reminiscing on a seminar with Waka Sensei 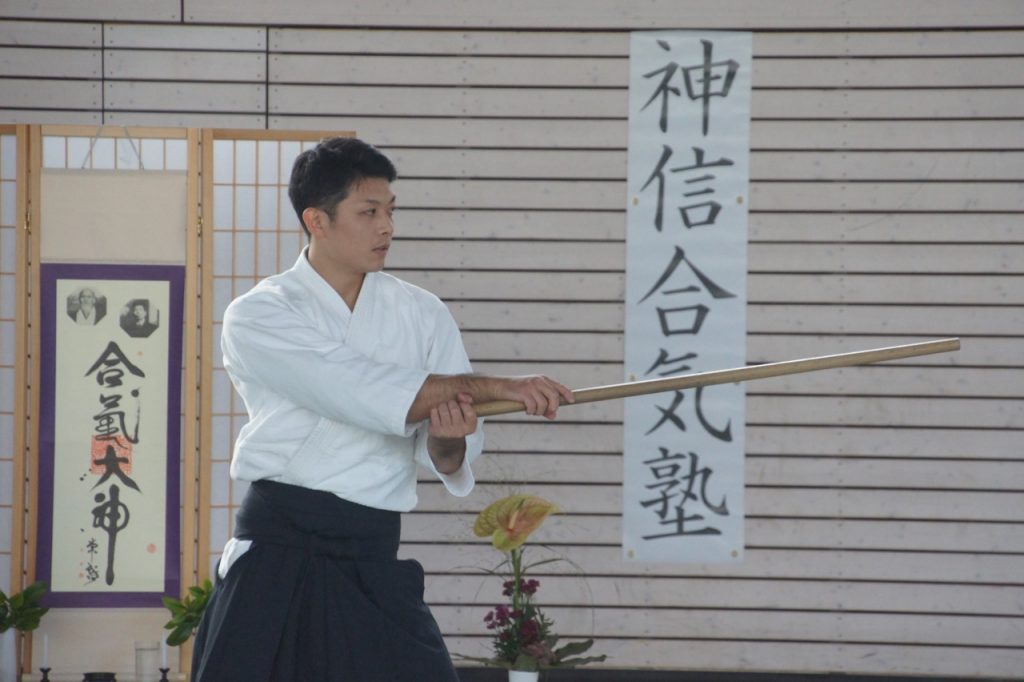 “Upon opening the door to a dark room you do not have to wait for even an instant before the light floods in.  This is the proper timing of aikido technique.”

Such was the advice of Yasuhiro Saito, the young master, “Waka Sensei” of Iwama Shin Shin Aiki Shurenkai and son of Saito Hitohira Juku-cho, during a seminar conducted in Korntal-Munchingen a suburb of Stuttgart, Germany, 23-24 September 2017.

Demonstrating with his characteristic precision and speed, Waka Sensei led classes in kumi-tachi, taijutsu, and kumi-jo with a strict emphasis on proper kamae posture and body alignment.

Reflecting upon my experience with the seminar, I am struck by the profound insight Waka Sensei imparted to the more than seventy people from over ten countries, including Germany, Portugal, Switzerland, Slovakia, Austria, England, Italy, France, Sweden, and the United States.

His admonition to move like light flooding into a dark room recalls how Ueshiba O’sensei would talk about moving “with the speed of the gods”.  For the founder, such movement was embedded in the idea of “swift victory” found in his oft-stated phrase: “Masakatsu Agatsu, Katsuhayabi”.

It also reminded me of the Zen monk Takuan Soho’s discussion in The Unfettered Mind of how a spark flies off immediately when striking a flint.  No hesitation.  No interval.  No gap between mind, body, or technique.

This kind of unified and instantaneous action is only available when principles have become so ingrained that the body-mind system is thoroughly programmed to deliver the correct response upon demand.

This level of exactness can only come through a honing process called suburi.

Waka sensei demonstrated the form and movement everyone interested in Iwama style aikido should strive to embody in their suburi and kata.  To develop such skill he talked about the need to be more specific in targeting.  For example, rather than directing a jodan-tsuki to the upper body or face of an opponent in general, Waka sensei related how he trained to focus on a specific point like the eye or nose of uke.  He relayed how he practiced this over many hours of solo training by picking a specific small spot on a tree or wall to aim at.

This reminded me of a phrase used in the sniper community: aim small, miss small.  Concentration must be precise in order to create the desired effect.

Clearly, Waka sensei is interested in upholding a high standard for Iwama-ryu aikido and advised everyone to strive for excellence in their basics.  For all of his considerable strength, he emphasized the need for proper skeletal alignment before any attempts to project power.  When so aligned, physical strength is largely unnecessary and, indeed, no amount of muscling through can overcome improper form.

For instance, in morote-dori kokyu ho, Waka Sensei illustrated how bending the knees to drop the hips facilitates dropping the elbow of the arm being held, all without using any muscular strength.  This begins the unbalancing of uke and allows for turning the hips with a corresponding kokyu through the fingertips to bring the held arm parallel in front of one’s own torso.

Once aligned in this way, nage is free to adopt a new hanmi facing in the same direction as uke, thus accomplishing kuzushi.  From here, Waka Sensei provided key guidance on how to complete the throw: One should throw behind themselves rather than throw to uke’s rear.

This subtle distinction can make the difference between smooth success and a frustrating struggle.  Throwing behind oneself completes the logical sequence of unbalancing uke into an ever downward spiraling throw.  Attempting to throw to uke’s rear actually helps stand them back up into a stable posture from which they are better positioned to resist.

One thing every aikidoka should avoid is creating obstacles to our own success.

Such practical advice is so simple even a child can understand, and Waka Sensei put considerable energy into a special class sharing such insights with the young members of the Korntal Shibu Dojo.  With patience and kind attention, Waka Sensei led the children through basic techniques in a way that left them brimming with joy.  Those that were able to receive his technique enjoyed an exciting ride!

Seeing such enthusiasm for aikido from children was significant for Waka Sensei.  In private conversation later, he expressed how important it is to cultivate the future of aikido.  Even in Japan, most young people gravitate toward more popular sports and recreation activities.  Those willing to devote themselves to a life of Budo are becoming exceptionally rare.

In this regard also Waka Sensei is quite remarkable.  Most young adults in Japan are fleeing the countryside in pursuit of the conveniences of life in bigger cities.  Operating a restaurant, settling down with a family, volunteering with the local fire department, and daily practicing aikido in rural Japan is arduous.  Despite having so much potential and opportunity as a handsome and strong young man, he chose to dedicate his life to the ideals of O’sensei and his father: country living and budo.

To further his understanding and broaden his experience, he studied Tenshoden Katori Shinto Ryu, the oldest existing bujutsu lineage in Japan and obtained a Mokuroku license.  The authenticity and practicality of this combat-oriented samurai curriculum undoubtedly show in his approach to aikido.  As his father, Juku-cho Saito Hitohira, has said: we must understand how the blade cuts in order for our techniques to have any real depth.

Anyone who has witnessed Waka Sensei demonstrate his lightning-fast tojutsu with a live blade can attest to his knowledge of how a blade cuts.

Aside from growing up immersed in aikido under the strict guidance of his grandfather (Saito Morihiro Shihan) and father, Waka Sensei’s extensive studies have uniquely suited him with a deep understanding of the nature of budo.

Those fortunate enough to visit Iwama and train at the Tanrenkan Dojo understand the potency of keiko there.  One can experience quantum leaps in their aikido when exposed to Saito Sensei and the atmosphere of his Juku.  A compounding benefit of training in Iwama is having the added attention of Waka Sensei and his willingness to explain details after class.

The people that participated in the Stuttgart seminar with Yasuhiro Saito, Waka Sensei, certainly caught a glimpse of what makes Iwama-ryu aikido so attractive to students all over the world.

For those interested in learning more about authentic and practical Iwama-ryu aikido, visit:

*Some of the photos in this post were provided by Thomas Podzelny Sensei.  Check out his site at: