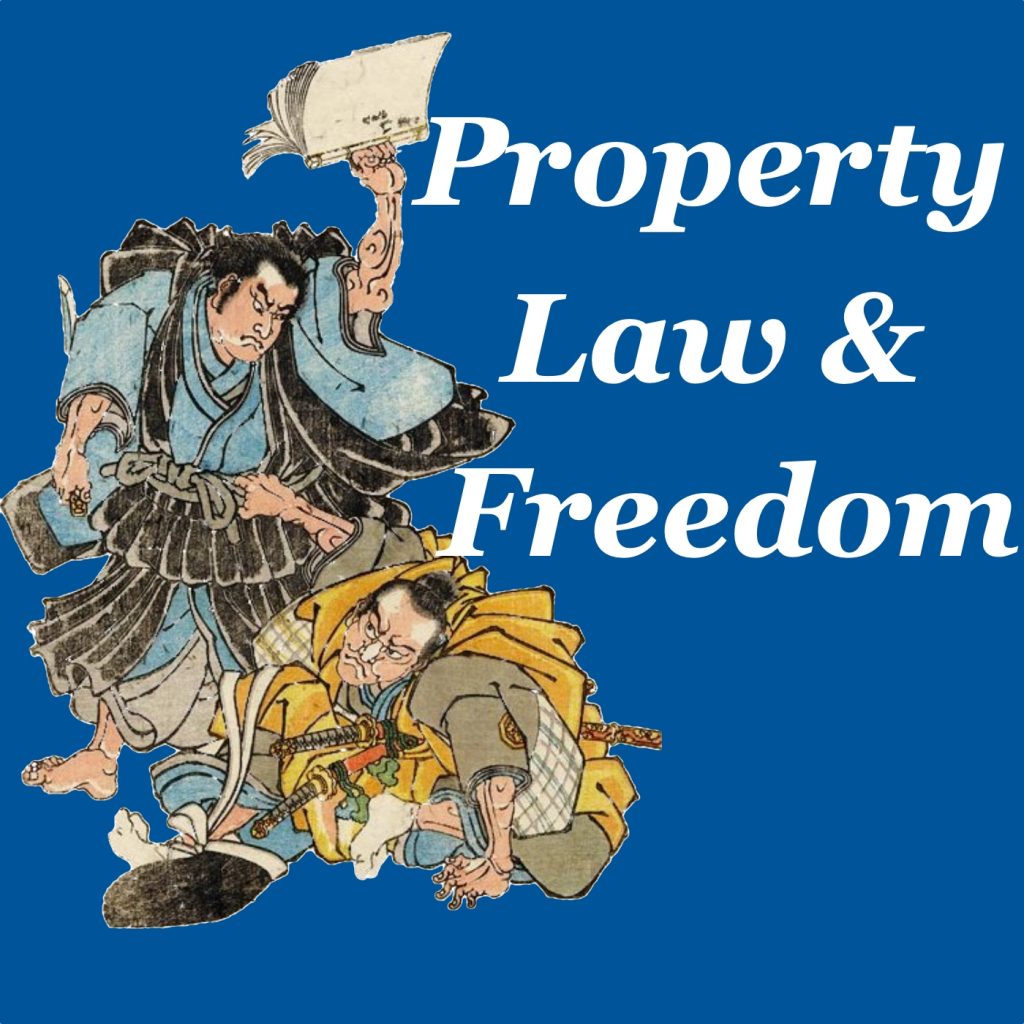 Inspired by recently attending Professor Hans-Hermann Hoppe‘s annual Property & Freedom Society meeting in Bodrum, Turkey, I share my thoughts on law and justice in a free society.  This involves sustainable hyper-federalism involving a combination of self-governing militia supplemented by market-based security providers.  A knowledgeable and well-armed citizenry must organize to protect the boundaries of social order because peace and justice get perverted when left to politicians and bureaucrats.

When you understand that private property is the only logically consistent way of understanding justice and applying a universal standard to everyone, at all times, you can know when to ethically apply martial skills.  In other words, a private property legal and social order is the best way of knowing when the use of force is justified.  Without such an ethical system all talk of martial techniques or tactics is baseless and dangerous even.

Most people, particularly in the United States, are familiar with the opening lines from the Declaration of Independence where the “pursuit of happiness” is substituted for property.  This innovation on the part of Thomas Jefferson and the Committee of Five that drafted the Declaration skirted around the contradictory nature of a tax-funded property protecting agency.

Still, the Declaration at least acknowledged that the whole purpose of government is to act as a security agent instituted “among men”, or, in other words, its constituent members, for but one sole purpose, that is to secure individual rights.

People talk about all kinds of rights nowadays, whether it be the right to health care, reproductive rights, human rights, civil rights, to clean water, affordable housing, a living wage, or any other fancy term bandied about in common discourse.  Most of them are a bunch of blustering nonsense aimed at distracting the average listener while politicians use such pseudo-rights as justification for stealing more from the average taxpayer.

Its only through the sound economic reasoning of the Austrian School, of which Professor Hoppe is a part, that we can cut through the distractions with logically consistent, razor-sharp analysis.

As someone that went into the military as soon as I was legally able out of a deep sense of flag-waving patriotism, and later got into law enforcement specifically to fight the war on drugs, the abrupt, yet undeniable, truth of Austrian political-economy, using individual subjectivity as the point of analysis, was quite an eye-opener.

Only through understanding the science of human action and its causal-realist subjective-individualism approach could I dispense with the illusion of collectivism.  I could no longer deny that only individuals act and that society was but a euphemism, or figure of speech, that glosses over a collection of individuals, each with their own preferences, characteristics, aspirations, and values.

I could no longer believe in enforcing legislation aimed at imposing some nonsensical “will of the people” when it contradicted respect for the individual.  I began to see that most legislation acts contrary to upholding law, because law is very simple and clear when viewed through the lens of property rights.

Rather than being ephemeral, ambiguous, and subject to corruption like every other kind of “rights” talked about in political discourse, only property rights have clearly discernible borders to signify when an actual violation has occurred.  While determining the facts of a case may be complex, the property rights standard remains unambiguous, clear, and clearly just.

As a warrior who has dedicated a lifetime to the cause of protecting others, I began to see that most of what I had been engaged in at the hands of the State was contrary to the cause of justice.  Such is the distorting nature of politics.

Coming to this realization was not instantaneous.  In fact it happened over a period of about a year, with many applications taken in layers.  Yet, reading the works of Ludwig Von Mises, and in particular his book on Bureaucracy, along with The Production of Security by Gustave De Molinari contributed greatly to my “Road To Damascus” moment where the scales fell from my eyes and I could finally see that the only way justice could be orchestrated properly is if people were free to choose their security providers.

This is precisely what the American republic was designed to be, a codified mechanism of self-government where We The People work together mutual security.  You can see this in the prominent reliance on the Militia of the Several States to “execute the laws, repel invasions, and suppress insurrections”.

The American republic was also designed to not establish a permanent security bureaucracy.  A standing army and the power to declare war was specifically denied to the central authority and most specifically the office of the executive.

Despite having the best of intentions, the United States federal system was quickly corrupted by the politically ambitious.  Self-government based on mutual security and individual liberty was soon displaced in favor of schemers that could use the institutions of government for their own selfish ends.  The notion of equal justice under the law gets twisted by what Anthony DeJasay calls “churning”, or the political process as it unfolds over a series of iterations.  Early politicians and statesman like John C. Calhoun also recognized the process of power expanding create different classes based on the contradictory nature of taxation.

That’s right.  Taxation creates class struggle because there are always those that benefit more by receiving a larger share of the take than those that receive less.  There are those that have more taken from them than any benefits they derive from government “services”.  Those that get more benefits, whether it be material or psychological will always be incentivized to call for more government power and more resources under the control of government authority.

While people have been writing about these things since the early 1800s, it was quite a shock to me when the tools of political-economic analysis clicked into my awareness.  I certainly did not get these lessons in any of my social studies classes in high school.

As I was immersed in the world of international security affairs at a very high bureaucratic level, I got to see how every so-called problem addressed by government is always accompanied by a call for more resources and authorities with which to address them.

Remember this every time you come across a political actor raising an issue: you will always find them agitating to get control of more resources, more finances, manpower, or authority with which to impose their desires upon others.  They will dress up the issue as being related to security (because security is the sole purpose constituting government) but will always have to create an elaborate scheme to skew the definition of justice.

This is how we get such nonsensical terms like “wars” on drugs, terror, poverty, women, or some other cause celeb, disaffected group; whatever the issue of the day might.

For this, it is important to remember Chapter One of Sun Tzu’s The Art Of War: all war is based on deception, and as Von Clausewitz so clearly stated in his On War or Vom Krieg in the original German: War is politics by other means.  Politics and war are functional equivalents, therefore, all politics is based on deception.

So it is natural that politics be rife with lies and false testimony.  Government activity, of which the sole function or reason for being is the orchestration of justice, inevitably becomes distorted by political processes.  We should come to expect it…and become adept at seeing through the deceit.

Entire industries accompany the weaving of a tapestry of illusion to create a facade legitimizing unlawful government activity.  Think tanks, bureaucracies, international and civic organizations, educational institutions, and media outlets have replaced the high-priests and oracles engaged in making grand pronouncements of the divine right to rule.

They generate reports, hold conferences, sponsor academics, perform ceremonies, and engage in great pageantry to convince the public that politicians and bureaucrats are working selflessly and necessarily in the interests of the “greater good”.

Cutting through the delusion requires consistent analytical standards, just like surviving interpersonal combat requires adhering to undeniable principles.  In samurai related martial arts, based on edged weapons combat, the principle is to not contest for space with a force vector.  That is, we recognize the human body, no matter how strong or armored it might be, is no match for the blade, bullet, or blunt instrument, therefore we learn how to shape or bodies in relation to the threat, maneuver to a tactically superior and unassailable position, to strike in a manner that the enemy cannot avoid.

In samurai martial systems we study angles to understand combat geometry, and geometry has axiomatic formulas, such as the Pythagorean theorem, that can inform our understanding of the real world without necessarily going out to measure or test things.  We can use geometry to expand understanding simply by using our minds and later use these insights in a practical manner.

In the realm of political-economy, principles are based on the a priori truth of human action.  A priori is just a term that means a fact of existence embedded in the bedrock of reality.  They are axiomatic statements taken to be true prior to testing or empirical verification.  Of course, you could test or verify these things, but by doing so you have not added anything to the body of knowledge, just like how using the Pythagorean theorem to calculate the measurements of a triangle does not require you to go out and measure some pyramid-shaped buildings.

The action axiom implies that only individuals act and they act in order to transform their present condition to one of greater satisfaction.  Human action always takes place in the manifest realm of time, space, and form.  Political-economy is a separate discipline from metaphysics or theology.

It involves the use of finite resources, found in the material world, applied with the belief that an action will achieve a desired end.  Human beings must use resources to sustain themselves physically.  To use resources, individuals must control physical resources and be free from interference from others.  Property rights are the social convention that gives an individual, working individually or in concert with others, exclusive control over a given resource.  In other words, property rights are a necessary pre-condition to sustain or improve human life and prevent interpersonal conflict.

Perhaps now you can see that understanding the principles of political-economy is essential for every warrior, protector, or justice seeker.  Before you can skillfully apply warrior skills, you must know when and why you are using them.  To be on the side of justice requires understanding its nature.

Pick up a tactical pen and get our training guide as a bonus: shop.everydaysamurai.life

Get into fitness & flexibility: www.everydaysamurai.life/Progress

Get the coaching you need to prevail in life: www.everydaysamurai.life/success

Check out this episode!

Listen to the full episode:

Please log in again. The login page will open in a new tab. After logging in you can close it and return to this page.