Stimulating the economy is the standard destructive remedy promoted by statists 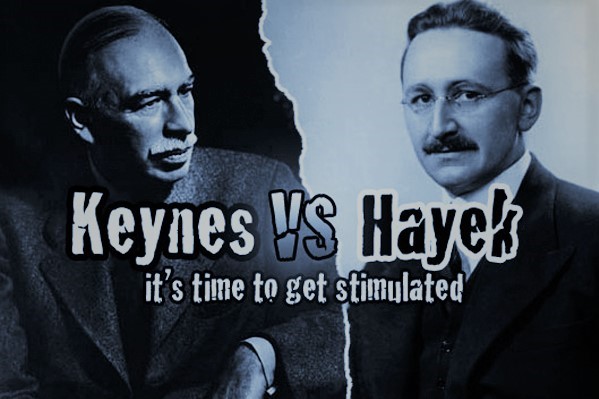 “These are silly illusions. When has the state ever re-directed the proceeds from taxes to the poor, so that they could build their own capital? The richest of them all—the state—simply swells its expenditures, and the politicians keep promising more.”

What do a machine for filling candy with chocolate, a gravel quarry, a garden center and a freeway have in common? Nothing at all—except that current economists call all of them “capital”. With this false viewpoint, or illusion—which rakes all forms of capital into the same pile—current economists—staffers of national regimes or of the European Central Bank — call for “stimulation” at the slightest slowdowns of the market. Right now, in fact, in the absence of any crisis, rather, with a mean, menacing virus, and with somewhat weaker growth in Europe, state expenditures and state deficits should be even higher, it is claimed. Still, more money must flow into banks from the European Central Bank (ECB).

The economic motive behind this, according to the economist John Maynard Keynes, is the supposedly necessary “stimulation” of the “aggregate demand”. If this is too small, there is a shortage of buying power. If it were stimulated, by pumping more money into the economic bloodstream, there would be more income and thus more demand, the capital outlays mentioned above would reach their full potential, and new ones would appear. This would bring wealth to everyone.

After ten years since the financial crisis, these stimulations have brought about nothing that would otherwise have happened when there is a recovery after a crisis.

Those are daring promises. After ten years since the financial crisis, these stimulations have brought about nothing that would otherwise have happened when there is a recovery after a crisis. The “recovery” has been as small as possible, but the means employed to bring it about have been greater than anything in history.

On the other hand, what would really help, would be attention given to the real side of capital in the national economy. Spending streams and capital outlays are not homogeneous, as Keynesian theory assumes, but are quite various in type. They serve a variety of purposes (as Benjamin Powell of Texas Tech University puts it, they are heterogeneous and multi-specific). When the state pursues deficit financing, with a wave of expenditure, the gravel quarry and the freeway (as mentioned above) go into operation, because stimulation goes mostly into the building industries and other, similar large-scale branches of the economy. And Keynes, the discoverer of the demand-oriented school of economics, wrote expressly that the state must not create values that serve the private consumer: “Even wasteful lending policies can enrich the common good as an end result”. Just think: the Treasury could fill old bottles with brand new bills, and bury them in coal mines under government landfill. The building industry could then dig them out, buy machinery (“capital”), and hire workers. And society would “probably” have a better influx of capital wealth in this way! (Keynes, The General Theory of Employment, Interest, and Money (1936), p. 128 ff.)

The failure of demand-stimulus and its ruinous side-effects

So where are the chocolate-filling machine and the garden center? Keynesians think that the stimulated income streams will raise all boats. The new income of private individuals would then direct these streams into the chocolate-company and the garden center. But the Austrian School of national economics looks instead, with Friedrich A. von Hayek, to the differentiated characteristics and purposes of the capital outlays of a people’s economy—that is to say, they attend to the qualitative aspect. This is why the stimulus of any “aggregate demand” is finally a cynical undertaking; just as cynical, in fact, as the assumption that the government debts incurred to that end are never going to be a problem.

For 80 years, the discussion has gone back and forth between the two camps, but the Hayekians have some good points to make here. As mentioned above, the stimulus of demand through the central banks that has been in effect for the past ten years has brought very poor results. It has used such enormous amounts of debt and newly printed central bank money, that the net effect is zero or less. There are also direct losses (according to the 18th century “Cantillon’s Law”), whereby an injection of fresh money into the economy always favors the bankers and financiers first, who are the ones closest to the sources of the inflow, and consequently are the first to get the cash, and this occurs at a time when prices have not yet been raised by the increased quantity of money. And what favor they do receive! The low interest rates and the glut of money have always made the distribution of income more difficult in the West, because stocks and bonds enormously increase in value in the hands of the wealthy. Savings banks and pension accounts, on the other hand, offer no interest. The less wealthy must save even more, in order to have something left for retirement, and their demand for consumer goods sinks as a result. Through the low interest rates and bond sales of the European Central Bank, many firms which are not profitable are allowed to survive, and can only survive because of the low interest rates—wandering about like zombies. They force down prices for others, and for themselves. And consequently (not only because of this, but for other reasons too) the inflation so frivolously wished for by the banks fails to materialize.

But most of all, if there is any capital at all, it is produced for the state and its projects, and not where private persons would have produced it and put it to use, if the money had been in their hands. The pressure of taxation keeps increasing, and the anticipation of being asked to pay more and more taxes is not an encouragement to build one’s capital. The opposite is the case: the huge balance of credit of the Deutsche Bundesbank toward the European Central Bank, and of the latter toward Italy, are mainly based on flight capital of Italians wanting to save themselves., and on claims against virtually insolvent states—and that means on bad loans. This “capital”, then, is not present in Italy, is not used to buy chocolates, and does not create any new companies there. But the Central Bank keeps printing money that never becomes capital in Italy.

Economic crises are the result of wrong allocations of capital, falsely inflated areas of the economy, or to put it another way, mis-investments, brought about by the inflationary monetary politics of the Central Banks.

This does not make for very high hopes for the future, and not only because of the unfathomable government debts that are the result. Rather, and mainly for the following reason, as F. A. Hayek and his students rightly argue: economic crises are the result of wrong allocations of capital, falsely inflated areas of the economy, or to put it another way, mis-investments, brought about by the inflationary monetary politics of the Central Banks. Interventions by the state and the central banks only bring, as we have said above, more of the same, and not anything new, no innovation, and consequently no growth in productivity and no higher profits. The state can only stimulate, and for a limited time, enterprises that are already in existence—and that means, it only strengthens disequilibrium.

The solution that the “Austrians” recommend for such crises is somewhat painful, but direct and effective: bankruptcy, annihilation of capital, “creative destruction” (J. Schumpeter). This would eliminate false capitalizations and free up resources for something new. Crises are short, and lead to healing.

But that can happen only with difficulty in an excessively credit-financed economic system.  And here too, the legacy of the Keynesians adds pressure, a legacy which is so eagerly absorbed and cherished and cultivated by most Anglo-Saxon economists. Indebtedness is always good, is what we hear from that quarter. When the national economy saves money for things, and saves ahead of time, and then privately invests in capital, and operates by entrepreneurial principles, then bankruptcies and crises do not have such wide repercussions as in partially-financed banking systems with their over-indebted companies, individuals and governments. Today, priorities are upside-down: saving shows lack of solidarity! Just listen to the tirades of many economists in the USA or the OECD against Germany, because it allows itself to function with a small government surplus, and because private citizens do likewise with their own budgets. And the same goes for Switzerland.

Ultimately, there are different visions of society behind it all. Keynesians build their vision on the central state—the almighty, intervening state, which guides the huge conglomerates—investments, consumption, exports, savings, credit. Hayekians believe that such “universals” do not represent anything, and in fact distort our view of economic realities. It is always individuals who buy, sell, trade, invest in “capital”, and are always doing this in a completely diversified, miscellaneous way (this is the famous “methodological individualism” of the Austrian school). He who participates in the economy wisely and well, succeeds; he who doesn’t, loses—and eventually goes bankrupt. Individuals learn how to rescue themselves without waiting for help from above, without being anaesthetized through government aid, thereby becoming “immune” to the health-giving governance of market forces, and end up merely “surviving”—like zombies.

It is inconceivable how the European—and now the American—“left” are hoping for the weakening of society through the Almighty State: feeding huge corporations with low interest rates, letting savings accounts wither, thereby guaranteeing the concentration of capital, and refusing to look at the quality of the economy and the particularity of capital assets.

We can point to an example of this: the demand of the left, of left-leaning liberals, and of some super-wealthy individuals plagued with bad consciences, for steep inheritance taxes. They say they want this in order to combat the evil of concentrated capital.

These are silly illusions. When has the state ever re-directed the proceeds from such taxes to the poor, so that they could build their own capital? The richest of them all—the state—simply swells its expenditures, and the politicians keep promising more. If anything, the state should have simply divided up the stock shares of the rich and given them as real capital to the poor in the suburbs.

But looking at the qualitative aspect of the economy shows the opposite. When the state sucks capital by way of inheritance taxes, the state lets money flow into its own coffers. So the inheritors have to sell off real capital—stocks, real estate—and pay the proceeds to the state treasury. Then the state creates capital—as a gravel quarry, more highways, and government buildings. All capital is not the same. The state-run Produce Market replaces the garden center. And the poor eat fewer chocolates.

Translated from German by Gerald Malsbary