A Three Pronged Strategy To Overcome

The Greatest Tyranny Of Our Age. 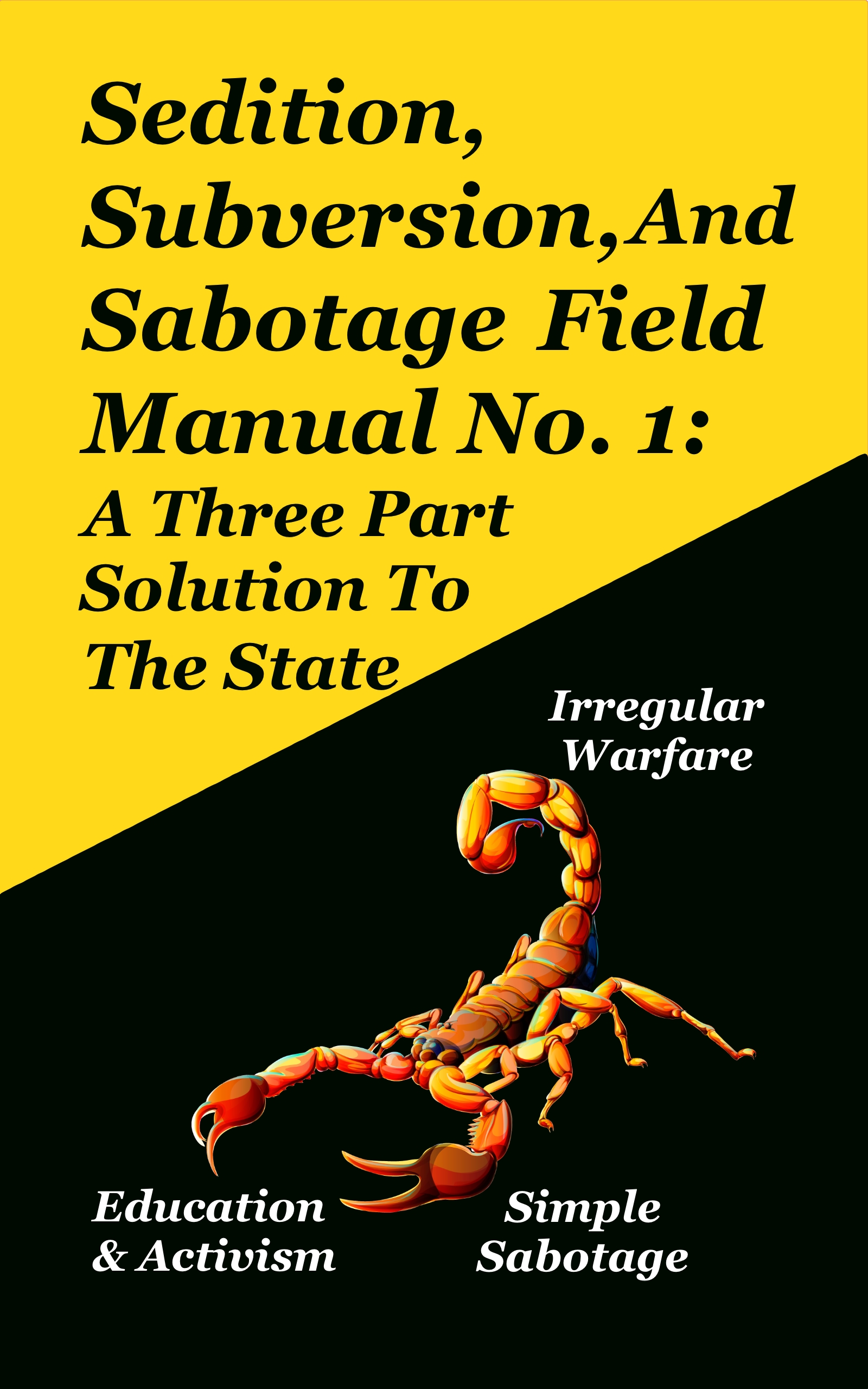 "The State Is A Gang Of Thieves Writ Large"

The great economist Murray Rothbard was certainly correct to use that phrase to describe the State, the peculiar social institution claiming a territorial monopoly on the use of force coupled with the power to tax.  Rothbard went on to say:

The State is an inherently illegitimate institution of organized aggression, of organized and regularized crime against the persons and properties of its subjects… a profoundly antisocial institution which lives parasitically off of the productive activities of private citizens.

Unfortunately, the "Liberty Movement" has failed.  The State is bigger, more invasive, and more expensive than ever.  Likewise, directly confronting the massive Leviathan modern states have become is also foolish and doomed to fail.

A new strategy, with a new catalogue of tactics, is required to contend with the modern manifestation of tyranny.  That is exactly what the Bad Quaker Sedition, Subversion, and Sabotage Field Manual No. 1 provides.  It really is a Three Part Solution To The State!

Frederick Bastiat nailed it in this diagnosis.  The State was entrusted to provide security and maintain justice yet has become a vehicle of plunder and social conflict.  Rather than living in harmony, the State compels people to struggle over legal institutions.  Bastiat continues:

As long as it is admitted that the law may be diverted from its true purpose—that it may violate property instead of protecting it—then everyone will want to participate in making the law, either to protect himself against plunder or to use it for plunder. Political questions will always be prejudicial, dominant, and all-absorbing. There will be fighting at the door of the Legislative Palace, and the struggle within will be no less furious.

We know the State is the source of social strife, conflict, and impoverishment yet the so called Liberty Movement is doing it wrong.  Libertarian proselytizing alone will not work.  Agorism alone cannot work.  Similarly, violent clashes with the State will not work.

The Sedition, Subversion, and Sabotage Field Manual No. 1: A Three-Part Solution to the State offers a three pronged strategy for effective action.  This is a results-oriented primer on liberating humanity from the chains of slavery!

A Three Pronged Solution to that scourge called the State:

Sedition is overt conduct or speech inciting or provoking people to rebel or resist authority, especially the State or of a specific governing body.

Deliberate action aimed at weakening a polity through subversion, obstruction, disruption or destruction.  Sabotage can involve violent or non-violent actions.

Rejects violence against non-combatants, and their property, and favors selective engagement with those considered highly valued or highly aggressive targets.

To liberate humanity, and secure the blessings of liberty, the monopoly State must be undermined at every turn.  To do so, new strategies and tactics must be employed so that new safeguards for freedom can be constituted.  There is no single, one-size-fits all, formula.  Likewise, there are no political heroes and no political action remedies.

Ben Stone's three pronged strategy involves peaceful sedition to stem the tide of encroachment, simple sabotage to weaken State institutions, rendering them impotent (as well as incompetent), and ethics-based irregular warfare to target only those who live through aggression.  There is a role to play for everyone who values liberty.  Learn how you can be a part of the solution with specific actions today!

In 1944 the US Office of Strategic Services (OSS) published The Simple Sabotage Field Manual to instruct people subject to hostile occupation on how to undermine a tyrannical regime through a variety of commonplace activities.  At the time of the manual’s publication most resistance movements were struggling against German National Socialism.

In the current era, freedom seeking people find themselves in territory occupied by tyrannical regimes imposing Democratic Socialism under a variety of different names and governmental systems.  Regardless of what these cartels call themselves, the common denominator for every monopoly state is institutional hostility to private property.

People are paying for more government than ever before and, rather than ending the barbaric practice of slavery, widespread democracy has only socialized the custom and spread the weight of supporting an ever-increasing parasitic class upon a wider swath of the population.

To secure the blessings of liberty and restore a “free state”, the monopoly state must be undermined at every turn.  Ben Stone, along with the a host of contributors, has produced The Sedition, Subversion, and Sabotage Field Manual, Volume 1: A Three-Part Solution to the State as a remedy to the current threat of socialist conquest.

It offers practical steps that anyone and everyone can take to liberate themselves from the predation and parasitism imposed by regimes hostile to their lives, liberties, and, most importantly,  private property.  It is a call to action, as well as a guide on how to take effective action.

Volume 1 of the Field Manual was originally published in 2016 and remains available as a free PDF download across the internet, particularly at Stone’s Bad Quaker website: https://badquaker.com/

Then, why publish a new version when the PDF is available for free?

First, I personally prefer ebooks in either ePub or Kindle format.  PDFs are fine.  However, the functionality of digital books is much more user friendly, particularly with reading in ‘night mode’ as iBooks and Kindle now do.  Notes, highlights, and search features are also much better in eReaders.

Second, I have reformatted the text to make it easier to read.  Paragraphs are shorter and key statements are separated for greater impact.  In doing so, I hope, the reader will have greater connection with, and retention of, the important material contained in this manual.

Third, by making the Field Manual Number 1 available in iBooks and Kindle a wider audience may find the message of liberty and be inspired to get educated and, ultimately, to take action.

Finally, Kindle’s print on demand allows those interested to own a professionally produced hard copy of the manual.  This alleviates the need for inventory management or calculating print runs.  The motivated activist can now order and distribute copies of the manual to their heart’s content.

With all this in mind I hope that you find this edition of The Sedition, Subversion, and Sabotage Field Manual, Volume 1: A Three-Part Solution to the State most satisfying.

To your ultimate liberation!

A Three Pronged Strategy To Overcome

The Greatest Tyranny Of Our Age.

In Service To Your Liberty