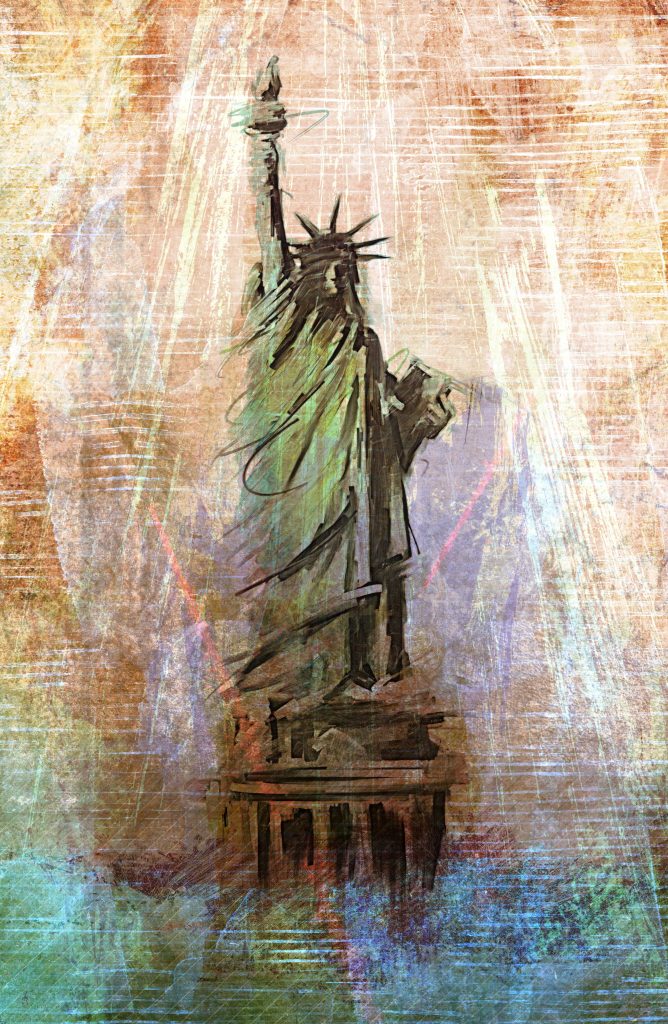 Just what is a free state?  It is a state of being where people are secure in their persons, houses, papers, and effects.  Conveniently this was clearly stated in the Bill Of Rights.  This is more easily summed up with the word property, whose borders form a convenient line from which everyone can distinguish what is one’s own or what is owned by another.

So, using property as your guide, it is easy to know when a line is being crossed and when a violation occurs.  Using this straightforward standard, it is possible to create a world that works for everyone because the only legitimate use of force to protect people and their property.

In other words, we don’t hurt people and don’t take their stuff…and conversely, it is indeed legitimate to use force against those that seek to hurt people or to take what is rightfully owned by another.

So, informed by these principles we now know when violence is justified and when it is not.  Of course, legislation in differing political jurisdictions will likely deviate from this standard and it is incumbent upon each individual to conform with the legislative constraints they face, given the highly distorted and environment.

Put differently, Everyday Samurai is not in the business of giving legal advice.  We are simply describing principles while awakening the consciousness of warrior virtues and a protector’s ethic.

Which is also part of an effort to change culture such that defense of liberty will once more be viewed as honorable, and politics and law will similarly reflect these values.

What about you, friend, are you down for that mission?

Those that are willing to stand up for justice and uphold the principles of proper conduct in human relationships we can safely call warriors, or as they were most famously known in the Japanese tradition, samurai, which means one who serves.

Service in pursuit of justice, or upholding the integrity of people and their property requires a willingness to do violence in the face of would-be property violators.

It takes a willingness to offer one’s life or limb in service to one’s oath to provide protection, whether that is through allegiance to a client or for those people and things that you hold dear.

This is entirely different from the notion of fighting sports, where contests take place in a controlled arena with rules decided in advance.  The objectives of such contests are different as well.

Training from and for reality

Now, I’d like to quote a few paragraphs from some credible authors to provide some context.  The first is Ken Good, former Navy SEAL, and director of training at ProgressiveCombat.com, where he’s posted an article asking Which “Cage” Do You Fight In?

From my limited viewpoint, sport cage fighting is a challenging endeavor. It takes disciple, courage, specific conditioning routines, dedication, and heart. It a takes a willingness to reform and rethink your approach as required. Strategies and techniques for this type of encounter have improved dramatically over the years that I have observed it. It is awesome to see the transformation based on lessons learned. A test in this cage results in a winner and loser usually patting each other on the back saying “good fight” based on mutual respect. If not, they pass on their verbal jabs and leave it at that.

The cage is known quantity with clearly defined rules of engagement. Therefore specialized training routines, strategies, techniques are developed and deployed with varying degrees of success. In fact in many cases, you can specifically study/train for a particular opponent. If you lose, you get to prepare for the next individual. No big deal in the grand scheme of things. Those that prevail in sport cage do so under the following conditions:

The “cage” that Police and Military Personnel [note: and citizens operating as militia, so necessary to the security of a free state] find themselves includes but not limited to:

Strategies and techniques for these encounters are not even in the same strata as sport cage fighting. Drawing a direct line between them is highly problematic. If one cannot appreciate this, then I believe one needs to revaluate and revisit their overall perspective of personal confrontation with respect to armed combat.

Now, I’d like to quote a bit from Igensho: The Book Of Dignity, General Principles of Martial Art… and remember, a free PDF download of an outline of this book is available at no cost to you when you go to www.everydaysamurai.life/dignity: 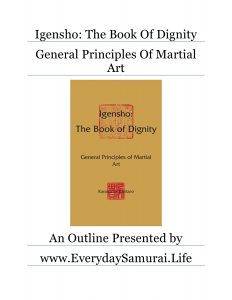 Martial art is not an athletic activity.  Although fitness is an admirable thing, it is nothing to do with the function of martial art, beyond minimal standards.  One prepares for athletic competition by maximizing fitness.  Competition is limited by rules and regulations, clear objectives are established and optimal conditions are provided.  Even the most brutal sports are limited in this way.  The operative word in “martial art” is “martial”.  This means military.  In its original and fundamental form, any martial art is a method of making war.  Therefore it is expected that the art must function under conditions of maximal duress.

The cost of defeat on the playing field is counted in points or dollars.  Athletes are encouraged to embrace good sportsmanship and be gracious in victory and defeat they are taught to “give their all,” and “to do their best;” that win or lose, what matters is how you play the game.  The cost of defeat in war may be counted in loss of autonomy, life, treasure, lands, and sovereignty.  Nations and cultures may cease to exist.  Peoples may be enslaved or exterminated.  As war is “a matter of vital importance to the state; the road to survival or ruin,” the happy maxims of sport do not apply.  Though the ultimate object of war is victory, the primary means of achieving victory in war are not those of sport.  The primary objective of strategy therefore, is not to achieve victory, but to avoid defeat…

Because martial art as practiced by the noble and aristocratic classes of feudal Europe and Asia is closely associated with power and wealth, and because these classes were also patrons of art and learning; because the study and practice of fine art and the humanities formed the character of a number of strategists and masters at arms and influenced their martial arts by enhancing clarity and sophistication of mind and physical sensitivity, and because most practitioners are no longer warriors and thus no longer tempered and sobered by combat, a great confusion has come to obscure the relationships between these people and their methods.

Even when exhibiting optimum efficiency, military method operates through the cultivation, possession and maintenance of power, whether exercised or not military power is nothing more or less than the capability to kill. Thus Yamamoto Tsunemoto: “the way of the warrior is death.”

Securing a free society, a free state where people and property are respected, requires a willingness and capability to violently repel would-be transgressors.  While physical fitness and other skills found in fighting sports may readily transfer into the arena of combat, the psychology completely changes, along with the physical dynamics, when circumstances involve uncertain death or permanent disfigurement.

It is important to question the assumptions underlying our approach to combat before making comparisons.  Strategy must be informed by philosophy.  Knowing why is much more important than thinking about how.  The security of a free state, for you and what is important to you, demands deep introspection.

If you want to acquire combat skills that are focused on reality and untainted by the sports mentality, check out: www.everydaysamurai.life/realdefense