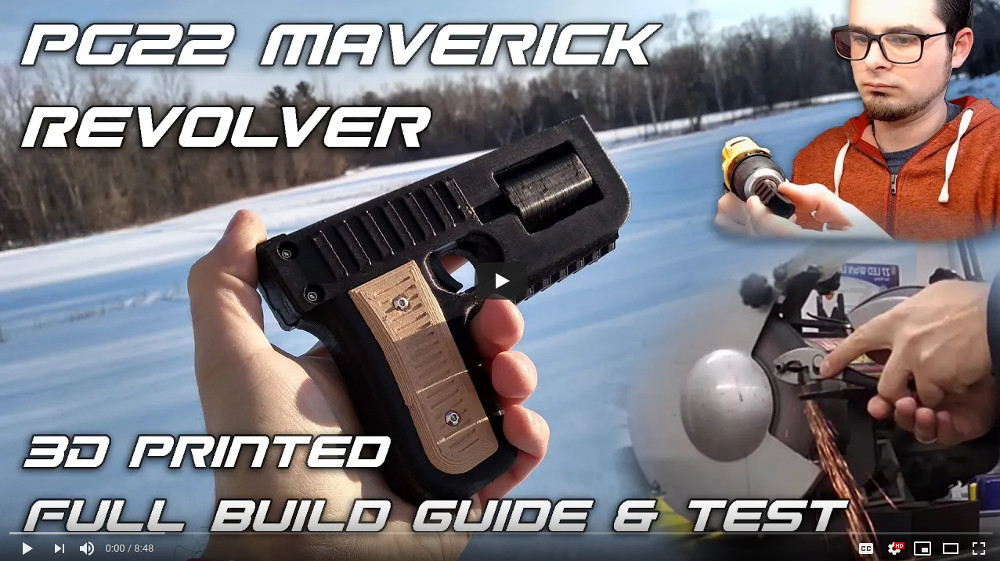 U.S.A. –-(Ammoland.com)- Ross Peters, in Wisconsin, has created a hybrid 3D printed functional cartridge revolver, with metal components. It has been demonstrated on Youtube. The design is an interesting hybrid pepperbox, with rifled barrels.

The video gives a good explanation and documentation of this six-shot pepperbox. Peters designed the handgun to fire .22 shorts.

The barrels for the revolver are made with .22 barrel liner, which is easily available by mail order. One of the reasons to use barrel liner is it is commercially rifled. This meets the requirements for a rifled barrel, to have the firearm classified as a pistol instead of a short-barreled shotgun, in the United States.

As a historical note, the first successful cartridge revolver in the United States was chambered in .22 short. It was the Smith & Wesson No. 1. The velocity of the black powder short cartridge with the 29-grain bullet was listed as 850 feet per second in the July 19th edition of Shooting and Fishing, 1906.

The modern high velocity short cartridge lists a muzzle velocity of 1132 feet per second out of a rifle. Out of the short barrel of the PG22 Maverick, the velocity is likely comparable to the black powder cartridge out of the Smith & Wesson No. 1, which used a 3-grain black powder charge.

The .22 Short is no toy. It can easily kill large animals if the shot is placed properly. Before anesthetic, antibiotics, and modern surgical techniques, a shot to the chest or abdominal cavity with a .22 short was very likely to be fatal.

Someone who is shot with a .22 short today, in the chest cavity, who does not seek medical treatment, will probably not wake up a few days later.

Peter's use of a ball bearing to index the hand-turned cylinder on/in the muzzle of the bottom barrel is innovative. It works as a cylinder stop. It is a simple, accurate, and cheap method, all desirable traits in a design.

The long bolt used as a cylinder pin adds tensile strength to the PLA frame.

The bolt used for an adjustable front sight was a nice touch.  The pepperbox showed usable accuracy for defensive purposes.

Because 3D printed designs are dimensionally accurate, the accuracy achieved with the ball bearing cylinder index would be very good. It is probably sufficient to use the design as the basis of a more conventional revolver with a fixed barrel in front of the cylinder.  Fixed barrel revolvers are more accurate than pepperbox revolvers. They tend to be more powerful, because the barrels can be made longer without being cumbersome.

In my experience, smooth tubing could be used for the cylinder chambers, cutting down on expense. Some nominal 8mm outside diameter / 6mm inside diameter stainless steel tubing, purchased online, did not need to be altered to chamber .22 LR. While slightly oversize, when five .22 Long Rifle cartridges were fired in a test rig, the cases bulged but did not split.

The tubing cost about $3 for 250 mm, enough to make six to nine chambers. Shipping was free. With a diligent Internet search, 5.5 mm inside diameter tubing might be located, or 5mm tubing could be drilled out to 5.5mm for tighter chambers.

For proof of principle designs, such as the one made by Ross Peters, the nominal 6mm inside diameter tubing would be sufficient. Careful safety precautions would be necessary to prevent injury.

The barrel would need to be rifled, to meet U.S. legal requirements.

Inexpensive commercial revolvers use a generous forcing cone at the back of the barrel to compensate for indexing tolerances.

Several existing designs for hybrid 3D printed revolvers have been made which index when cocked.  A rotating hammer, substituted for the striker in Peter's design, would make such a gun more ergonomic.

A rotating hammer, connected with linkage to rotate the cylinder, would result in a revolver that would function similarly to conventional single-action designs.

Because of the fixed barrel ahead of the cylinder, conventional revolvers tend to be accurate handguns. The same barrel liner material used by Peters for barrels in the PG22 Maverick would make a legal barrel for a more conventional design.

In the United States, the barrel must be rifled to meet the regulatory requirements of the National Firearms Act, first passed in 1934. The NFA had little useful effect in 1934, and even less today.  It is haphazardly enforced, but you do not want to be one of those chosen for enforcement.

I strongly recommend readers work to understand the law and follow it to the letter.  Playing with gun designs is a dangerous business. I am not recommending any particular design or course of action, because I have no control over any decisions made by those who choose to tinker with 3D printing.

3D hybrid designs are interesting, and legal in the United States. They have virtually no practical effect on crime. High quality .22 pistols can easily be purchased with the dollars which would be earned if the same number of hours used to make the hybrid were devoted to a minimum wage job.

The effect of hybrid designs is to show how ineffective it is to attempt to stop criminals from getting guns by restricting the legal commerce in firearms.

Reducing the legal number of guns has never worked to reduce the number of illegally owned guns. There is virtually no relationship between the two numbers.

The number of guns necessary to saturate the criminal market is such a small number it can easily be supplied with black market  small shop and home manufacture.

Dean Weingarten has been a peace officer, a military officer, was on the University of Wisconsin Pistol Team for four years, and was first certified to teach firearms safety in 1973. He taught the Arizona concealed carry course for fifteen years until the goal of Constitutional Carry was attained. He has degrees in meteorology and mining engineering, and retired from the Department of Defense after a 30 year career in Army Research, Development, Testing, and Evaluation.