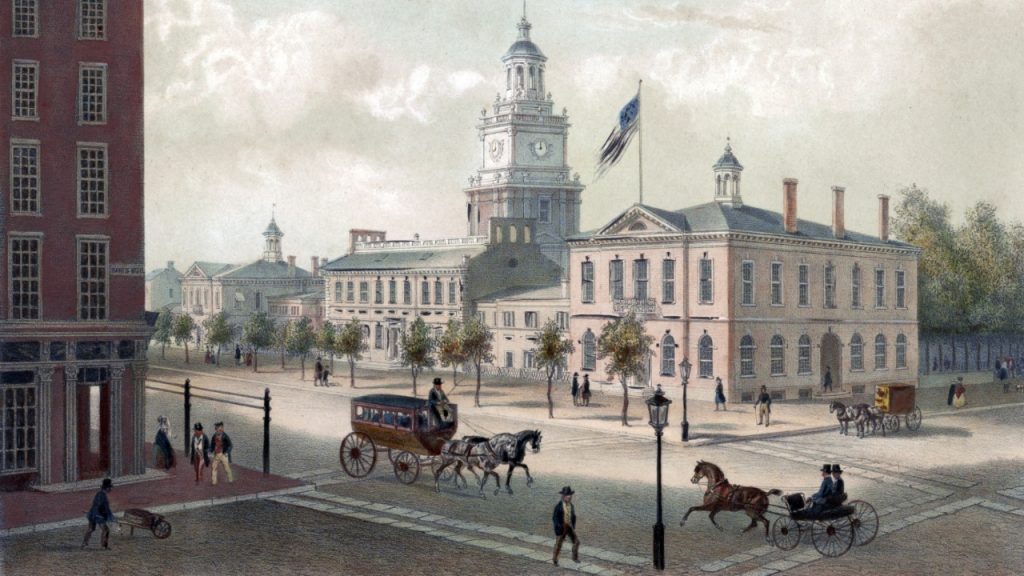 Do not read this book before eating, or in the midst of a sleepless night. For it is a revolting book, filled with the disgusting details of a loathsome disease.

Sounds like the opening paragraph of a one-star review by a merciless critic, but it’s not. It’s from the 1949 preface to a book by the book’s author himself, J. H. Powell. Titled Bring Out Your Dead: The Great Plague of Yellow Fever in Philadelphia in 1793, it is “the story of a foul and fantastic pestilence, striking without warning in all classes of society,” a true account of “people sick in body and heart, astonished and fearful, paralyzed by the mysterious obscenity about them.”

I thoroughly enjoyed it—the book, that is.

Powell brings to life the people and events of the worst epidemic in American history—yes, worse than the Wuhan coronavirus of 2019-2020 and the Spanish Flu of 1918. Though it was localized in Philadelphia, it killed nearly ten percent of the city of 51,000 people between August 1 and November 9, 1793. That’s about ten times the death rate in the U.S. from today’s pandemic. More than 40 percent of Philadelphians fled into the countryside to escape a disease whose origin (a virus spread by the bite of a mosquito) no one would know for another hundred years.

New interest in historic health disasters is drawing attention to Powell’s book, as well as another good one from 2003, An American Plague: The True and Terrifying Story of the Yellow Fever Epidemic of 1793 by Jim Murphy. For this essay, I draw passages from both volumes.

Philadelphia was America’s national capital and headquarters of the federal government in 1793. By act of Congress, the capital wouldn’t move to what is now Washington, D.C. for another seven years. President George Washington had commenced his second term in March. Five months later, in the midst of a hot, wet summer, Philadelphians suddenly took sick in huge numbers, leading quickly to scores of deaths each day. What did the Washington administration do in response?

Nothing. That’s all it could do. It possessed no constitutional duty in the matter and even less experience and expertise. No one argued there were epidemiological exceptions to the First Amendment or, for that matter, to any other provisions in the document ratified just four years earlier. So the federal government never got involved.

Even if the federal government possessed the power to jump into the crisis, it’s hard to conceive of any action it might have taken that would have better met the challenge than what Philadelphians did, crude though it seems by today’s standards. The feds were there, on the scene, but possessed no special knowledge the locals did not also have. Yellow fever is not contagious from one person to another. The disease requires a mosquito in between and nobody knew that then. Lockdowns would likely have made little difference.

The one big issue the Washington administration had to decide—whether to convene Congress in the fall at its Philadelphia location or somewhere else—prompted sharp views on both sides. Thomas Jefferson and James Madison (both of an Anti-Federalist bent) told the President he had no authority to move the site where Congress met, so it would have to be Philadelphia, in spite of the crisis. Alexander Hamilton argued that if a foreign enemy occupied the capital or if any other kind of disaster in the city prevented Congress from assembling, then of course the President could bring it together elsewhere. Just weeks into the epidemic, Washington and his Cabinet members themselves skedaddled to Germantown, ten miles to the north, and they hoped Congress would follow.

Jefferson and Madison won that one but, in the end, the question was moot. The first frost in early November killed the mosquitoes and the disease with it. Congress met in Philadelphia in December but one of its first acts was to pass a law authorizing the President to convene it outside the national capital in the future, should conditions require it.

Pennsylvania state government was also domiciled in Philadelphia at the time. The capital wouldn’t be moved to Harrisburg until 1812. In 1793, Governor Thomas Mifflin and the legislature provided some money to Philadelphia to help handle the crisis, then they left town for the duration. So it all came down to Philadelphians. Fortunately, they were blessed with both public and private leadership talent in the persons of Mayor Matthew Clarkson, Dr. Benjamin Rush, and others. Rush was a signer of the Declaration of Independence and had served as Surgeon General of the Continental Army during the War for Independence.

To this day, no cure exists for yellow fever. Thanks largely to the work of U.S. Army physician Dr. Walter Reed (no relation) in 1901, we know that the virus is spread by a particular species of mosquito, Aedes aegypti. Modern treatments and palliatives greatly reduce suffering and deaths. Draining swamps and pools of stagnant water remain the most effective preventative measures. But 230 years ago, what a victim endured and what “experts” prescribed were a medieval horror show. Powell writes,

Lassitude, glazed eyes, chills, fevers, headaches, nausea, retching, and nosebleeds would suddenly attack people in the best of health. These symptoms, more violent than any the doctors had ever observed, would be followed by a yellow tinge in the eyeballs, puking, fearful straining of the stomach, the black vomit, hiccoughs, depression, “deep and distressed sighing, comatose delirium,” stupor, purplish discoloration of the whole body [from liver damage], finally death.

In the panic that followed the onset of the epidemic, there was no end to the weird and ineffective treatments suggested and tried. They included dousing the afflicted with vinegar, “earth-bathing” (rolling in dirt), drinking molasses by the quart, burning tobacco in the streets. Purging and blood-letting were Dr. Rush’s favored remedies, which also included a concoction of mercury and jalap, the latter being a drug extracted from the tuberous roots of a Mexican climbing plant. As Murphy’s book reveals,

Ads appeared in the newspapers hawking Peruvian bark, salt of vinegar, refined camphor, and other concoctions, such as Daffey’s Elixir (which contained so much pure alcohol that a glass of it could put a person into a drunken stupor). The science of medicine at the end of the eighteenth century still relied a great deal on ancient myths and folk remedies.

Someone recommended that to purify the air of whatever was causing the disease, gunpowder should be liberally set afire. So for a brief time until residents complained of the noise and smoke, municipal workers pulled cannons through the streets and fired them every few yards or so.

Unaware that a mosquito was the carrier, many people thought they could catch yellow fever from proximity to someone infected. So “social distancing” became the norm. Powell writes,

People quickly acquired the habits of living with fear. Handshaking was abandoned, acquaintances snubbed, everyone walked in the middle of the streets to avoid contaminated homes. Those wearing mourning bands were obviously dangerous, as were doctors and ministers. People maneuvered in passing to get windward of anyone they met.

City government ordered a limited quarantine of arriving foreigners but to little effect because the source of the problem was not overseas. It was quickly lifted. When the city cleaned up the filth in and around the wharves on the river, it likely did more to help than the quarantine.

Afraid to leave their homes unless they had a place to flee to in the countryside, Philadelphians withdrew from commerce. Businesses closed. Mail delivery stopped. Newspapers were reduced to a single page for lack of advertising. Incoming vessels on the Delaware River couldn’t find dock workers so they sat in the water or on the docks while their cargo rotted.

Even clocks in the city went haywire. So many clockmakers and time-setters were sick, dead or gone that Philadelphians often couldn’t tell for sure what time it was.

Churches in Philadelphia never closed during the epidemic. Given the nature of the disease, it wouldn’t have made a difference either way. If government officials had ordered them closed, there’s good reason to believe that devout Philadelphians would have defied or resisted such orders.

To his credit, Mayor Clarkson responded with courage and good sense. He formed a committee of respected local citizens who organized makeshift hospitals, raised money for treatment, cleaned the streets and wharves, and looked after children suddenly orphaned when parents or guardians died from the disease.

Some white residents complained that black nurses in town were raising their fees in the midst of the crisis. They took their complaint to the mayor, hoping he would impose controls on those fees. He said no. Jim Murphy tells us,

The mayor knew he couldn’t order black nurses to refuse any fee over a dollar. If he forced them to hold down their costs, he would have to do the same with every merchant, laborer, and farmer doing business in town. How much food would be brought to market if he insisted that only pre-plague prices be charged? How many carters would haul away diseased corpses? What was happening with the black nurses was a classic example of demand exceeding supply, resulting in higher prices, and nothing more…He also had an ad published in the newspapers that admonished citizens to cease bothering the black nurses as they went about town to do their work.

Dr. Rush, though wrong about remedies, was right about his initial warnings that the illness was yellow fever; he also labored long hours to bring comfort to the afflicted. He died in 1813, widely esteemed a hero by his fellow citizens.

People in nearby cities and adjacent states pitched in to help the City of Brotherly Love while the illness raged. New Yorkers were first with a gift to Philadelphia of $5,000—a substantial sum in those days and the start of a cascade of philanthropy for Philly. According to Powell,

The news of $5,000 from New York spread about the city like a tonic. It was, Editor Brown proclaimed, an act of noble sympathy and generosity. And as other donations poured in, the Committee (of Mayor Clarkson’s creation) wisely gave publicity to them all, even the smallest. Brown’s columns soon were filled with letters from villages, townships, counties, congregations, and synods, all conveying gifts of some kind to the Mayor’s care. The distraught citizens could take heart. They were not alone in misfortune. All America was sharing their burden.

None of that giving was required by anybody. It was simply what Americans did, from the depths of their giving hearts, without mandates from on high. The Philadelphia epidemic of 1793 was one of the new country’s earliest and best examples of the cascade of private charity that defined the nation for the next two centuries.

Yellow fever outbreaks in Philadelphia occurred again during the last three years of the 1790s. None, fortunately, were as lethal and widespread as the 1793 episode.

All these many decades later, perhaps the applicable lessons for today of Philadelphia’s experience then are few and limited. For sure, it’s a tribute to the city that it rallied and prospered, thanks to the initiative of its citizens and the freedoms the nation as a whole enjoyed in its early decades. Half a century after the epidemic, Philadelphia was a bustling city of 122,000 people—two and a half times its size on the eve of the 1793 disaster.

Lawrence W. Reed is President Emeritus and Humphreys Family Senior Fellow at FEE, having served for nearly 11 years as FEE’s president (2008-2019). He is author of the 2020 book, Was Jesus a Socialist? as well as Real Heroes: Incredible True Stories of Courage, Character, and Conviction and Excuse Me, Professor: Challenging the Myths of Progressivism. Follow on LinkedIn and Twitter and Like his public figure page on Facebook. His website is www.lawrencewreed.com.

This article was originally published on FEE.org. Read the original article.