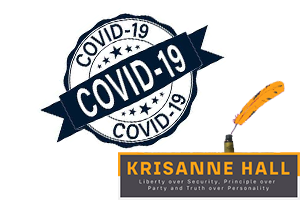 Since 1776, governments are based upon a fundamental principle that their sole purpose is to secure INDIVIDUAL Rights, not to appease the collective.

How much thought does the average American put into their Rights on a daily basis?  Perhaps not much, but that is all about to change.  For generations the Supreme Court has called protection of the individual’s rights the bedrock of American principles.  Those who ratified our Bill of Rights knew how vital these rights were to the very preservation of all liberty.  Among these rights are those that our founders would formally declare as being absolutely essential to life itself; freedoms of religion, speech, press, assembly, along with the individual right to keep and bear arms, security of personal property, and indispensable rights of due process.  Today these rights are at risk from an “invisible enemy.”

In 1788, the State of Virginia was refusing to ratify the Constitution without greater safeguards for these individual rights.  In that same year, Richard Henry Lee, Congressman from Virginia, described our Bill of Rights, the enumeration of rights of the individual in our Constitution, as:

“visible boundaries, constantly seen by all, and any transgression of them is immediately discovered: they serve as centinels for the people at all times, and especially in those unavoidable intervals of inattention.” (sic)

Unfortunately, we have entered into that “interval of inattention” as very few Americans can name all five liberties identified in the First Amendment; national polls put the number at less than 2%.  If we do not know what our Rights are, how do we know they are not already gone?  How will we know when people in power, either through good or malicious intent, move against our Rights; we cannot defend what we cannot define.

Our founders lived in the midst of the greatest tyranny America has ever known.  It was wrecking their churches, destroying their businesses, and tearing apart families and homes.  Even in their day of limited technology they knew who the enemy was; not a King, not a country, not even a virus.  The understood the enemy to be anything that jeopardized the inherent and individual rights of the people.  They knew from personal experience that when essential liberties of the people are even partially limited by government force, they are never truly restored.   Our founders spoke incessantly of the importance of fully securing our individual rights.

“Liberty must at all hazards be supported.  We have a right to it derived from our Maker.” (sic) John Adams 1765

“No people will tamely surrender their Liberties, nor can any be easily subdued, when knowledge is diffused and virtue is preserved.” (sic) Samuel Adams 1775

“Give me Liberty or give me death.” Patrick Henry 1775

Those who fought to secure our liberties today were firmly educated and intimately associated with their Rights and could easily identify their violations.  Today our dearth of education in American history is only surpassed by the misinformation we are fed about the purpose and power of government.  How easily this designed ignorance makes us fall prey to the undying argument that its necessary to “temporarily suspend” our Rights for some new and frightening boogey man.

Perhaps today we are being presented with the ultimate power poltergeist: an “invisible enemy” that can only be seen by those in government.  Because of a virus, that has no face and no foreseeable end, we are told that it is necessary to temporarily suspend our rights for the safety of the community.  However, all of history screams out to us in horror, “Rights are NEVER suspended temporarily, and safety is a ravenous phantom that can never be satisfied.  Once your rights are surrendered, they are never peacefully restored.”

Learn YOUR Constitution at LibertyFirstUniversity.com – The Constitution as if the founders themselves were teaching it.  An education worthy of the highestest institutions of learning because they won't teach truth anymore!

The mantra, “the needs of the many outweigh the needs of the few, or the one” is a Marxist principle not just a line from Star Trek dialogue.  This ideology is not what America was founded upon, quite the opposite.  Our governments, since the foundation of our States in 1776, are based upon the fundamental principle that the sole purpose of government is the secure the Rights of the INDIVIDUAL, not to appease the collective.  The cornerstone of American government is the responsibility of the people to self-govern.  It is not selfish for a person to demand full protection and security of their individual rights to freedom of religion, speech, assembly, and property. On the contrary, it is wholly selfish for the community to demand that the force of government deprive individual rights because there are a few who refuse to act responsibly in securing their own health and welfare.  Mass curfews and quarantines are not the American way, they are the communist way.  The American way says that we do not use force to compensate for the irresponsibility of the few.

Our State Constitutions and the Constitution of these United States were established as written standards to protect the individual from the will of the majority, to secure the rights of the minority.  Ironically the needs of the many argument used today to justify a cry for national curfews, business closure, and forced quarantine, justified by the needs of the many, is the same argument used throughout history to justify slavery and the involuntary and indefinite incarceration of innocent people, even in America’s history.  If residents wish to voluntarily follow guidelines and act responsibly, then so be it.  But when business owners, Pastors of churches, and Sheriffs’ defending rights, refuse to obey any of these unconstitutional mandates, they are not acting lawlessly because it is actually those in government who are violating the Supreme Law of the land.  These individuals are enforcing the law in the face of lawless government.

Our founders had very strong words for those in power who attempted to interfere with these inherent and essential rights.  Benjamin Franklin, writing under the pseudonym of Silence Dogood wrote in 1722 that only “Publick Traytors” (sic) would attempt to subdue these Rights.  He also remarked that when a person cannot freely express these Rights they live in a “wretched country” where he has no property rights.

In 1774 Thomas Gage, Governor of the colony of Massachusetts, issued a law outlawing all public meetings except one a year, but only when proper permit was obtained from Gage.  Those who would write our First Amendment classified Gage’s actions as an act of war against the people.  As soon as Gage issued his order 300 people assembled in Salem to protest the limit on their freedom of speech & assembly.  Gage would send troops to disband the protest only to see an additional 3,000 people immediately assemble and chase his troops away.  Thomas Jefferson issued instructions to the Virginia Congress in which he declared Gage’s law as an act of “Treason” and “the most alarming Process that ever appeared in a British Government.”

Now more than ever we must hold tight to the principles that founded America.  Through the full application of true America principles, we can defeat any enemy while simultaneously securing the individual liberties of the people.  We are about to travel a road our founders traveled, so let us pick up the wisdom of experience and move in the proper direction.  Samuel Adams said,

“Let us contemplate our forefathers, and posterity, and resolve to maintain the rights bequeathed to us from the former, for the sake of the latter. The necessity of the times, more than ever, calls for our utmost circumspection, deliberation, fortitude and perseverance. Let us remember that “if we suffer tamely a lawless attack upon our liberty, we encourage it, and involve others in our doom,” it is a very serious consideration … that millions yet unborn may be the miserable sharers of the event.”

What we do, what we allow those in government to do over the next few weeks, will determine the future fate of people in America and around the world.  We cannot give into the “invisible enemy” and their siren song of the “necessity” which sets a precedent for our inherent rights to be brushed aside so easily.  William Pitt The Younger gives this wisdom to our generation:

“Necessity is the plea for every infringement of human freedom.  It is the argument of tyrants; it is the creed of slaves.” 1787

When facing an alleged threat today, we must pause to ask, “will this make it easier for our essential rights to be dismissed tomorrow?”  Are building a future where are descendants view that which is fundamental as something granted and taken at the whim of rulers and masters?  Didn’t we found this Constitutional Republic to escape that very scenario?  Will a viral threat change our identity and have us cease to be America?  What we do in the next few weeks will inevitably answer these questions.

Learn YOUR Constitution at LibertyFirstUniversity.com – The Constitution as if the founders themselves were teaching it.  An education worthy of the highest institutions of learning because they won't teach truth anymore!