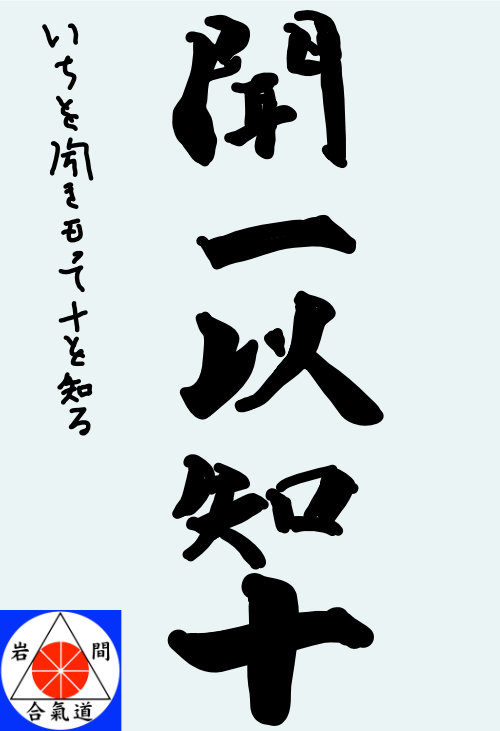 This is normally stated as: 一言えば十をしる (ichi ieba ju wo shiru).

The statement alludes to the situational awareness and social attentiveness, characteristic of Japan, that allows for subtle and less verbose communication.  Doing business requires developing relationships and remaining attuned to the spirit of things so that they understand what needs to be done without lengthy dialogue.

Recently, Saito Hitorhira, Kaicho of the Shin-Shin Aiki Shurenkai, posted a sign in his Tanrenkan Dojo in Iwama, Japan that expressed this sentiment with elegant brevity:

This is a more classical way of stating the same phrase and it has an interesting rhythm that conveys the same thought in less time.  While the standard business Japanese phrase is more frequently used, this classical rendering also incorporates a degree of that refined or muted elegance that is known as shibui (渋い).

In samurai related combat arts, such as aikido, perception has a large role in being able to anticipate and contend with sudden attacks.  Training for such eventualities requires seeing the details of a technique that exists on many levels, including those that are not readily visible.

Therefore, a student of Budo (武道) must expand their capacity for perception in order to grasp the real value of their training.

The way to develop a skill for understanding to the tenth degree for every one bit of information taken in also occurs in layers.  Peter Blaber, a one time Delta Force commander in the early stages of the Afghanistan campaign, wrote about a technique in his book, The Men, The Mission, And Me.

The unit consulted with psychologists and other cognitive specialists to develop a technique for assimilating large amounts of information in a short amount of time so as to find solutions to tactical problems.  The mnemonic for understanding this cognitive technique is: saturate, incubate, illuminate.

The saturation phase is one in which one simply absorbs information without any attempt at looking for answers in the immediate term.  The idea is to simply induct the information as broadly and as deeply as possible knowing that the solution will emerge at a later time.

This is akin to emptying the mind and allowing information into the subconscious while bypassing the internal editor.  Simply let it all in while ignoring the inner critic.  Getting comfortable with the discomfort of being in an unfamiliar space, full of awkwardness and confusion is the real task at this point.

Patience With The Process

The incubation stage is one in which the vast reaches of the subconscious are able to process the information in the background while we go about our other activities or the tasks at hand.  It is as though we have planted a seed and are allowing the soil, nutrients, moisture, and sun to do what they are biologically predisposed to do naturally.

There is no use in trying to dig up the seed while it is germinating.  In fact, trying to extract information in this way is counterproductive.  We allow the incubation stage to run its course and carry-on with other priorities in the present moment.  Patience and commitment to the process is familiar to the student of martial ways as well as biohacking.

The illumination stage can be either spontaneous or deliberate.  Blaber talks about waking up in the middle of the night when an answer to a complex question came to him in the midst of a dream.  The psychologists would later explain that it is natural for these types of occurrences when the subconscious mind figures things out and is ready to share them.

It could be a flash of inspiration, a picture in the mind, a voice, or some other form of cognizance but the subconscious mind will render a solution that the seeker needs to be ready to receive and believe.  Quite often we humans will dismiss clues our inner mind is trying to convey.  Releasing preconceived notions is required for opening to new understanding.

Deliberate mental illumination can also come through specific processes, such as image streaming, probative questions, rapid journaling, sketching, or facilitated dialogue.  This can also be called the activation phase because we are igniting the dormant power of the information already synthesized by the deeper functions of mind.

The same can be said in the process of martial arts training.  While focused on fixed pattern processes and training patterns known as kata are standard for learning basic movements and embodying necessary principles, the next stage is to transcend the form so that techniques can adapt to the situations at hand.

Literally translated, the progression is to protect, break, and then separate from prescribed forms.  I like to think of this as embracing the form, embody the principles behind the techniques, and then transform the techniques into whatever the situation calls for.

Therefore, I call the pattern of progression: Embrace, Embody, & Transcend.  Yet the pathway through this sequence is always patterns of technique through repetitive programming.  The performance experts call this spaced repetition and consider it the key to learning or building skill.

It is only by embracing the form while setting aside any need to demonstrate immediate results that allow for big gains down the road.  We have to focus on what is present, in the now moment, without trying to evaluate it.  We have to make room for the shift in consciousness.  In this way we can always hear one, know ten.

Taking It To The Next Level

This is true in all areas of life, not the least of which is personal success.  Expanding the capacity to perceive insights requires a paradigm shift.  Deliberate repetition is the key to upgrading the mental program that determines performance.

Being able to assimilate one piece of information quickly and then applying that knowledge broadly, in other words, to hear one and know ten, is a skill that requires practice.  If you’re looking for guidance on how to make a paradigm shift happen in your life, check this out.